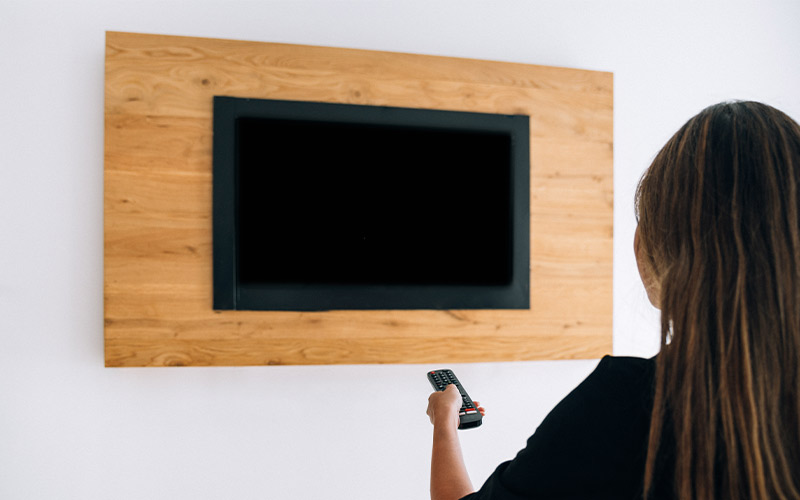 Don’t miss another second, because I’m here to help you troubleshoot this common Panasonic TV problem and to find the fix that will work for you.

There are a few different things that can cause this, so we’re going to start with the easiest ways to fix a Panasonic TV that keeps turning off. If the easiest, quickest fixes don’t work, I’ll point you towards some other things to try before you replace your TV.

Even though televisions are a lot less expensive than they used to be, that doesn’t mean they’re disposable. Spend a few minutes trying to fix your Panasonic TV before buying a new one, and you could save yourself hundreds of dollars and a lot of stress.

If you want to jump right to the solutions, scroll down and look for the green box. If you want a bit more information, context, and to learn about some of the reasons a Panasonic TV will turn itself on and off, then keep reading.

What Causes a Panasonic TV To Keep Turning Itself Off?

You’re sitting there, watching TV, and all of a sudden your Panasonic shuts itself off. It might turn itself on right away, then off again… Or it might just shut off, until you turn it back on.

When you turn it back on, it might shut off again immediately, or it might wait 15-20 minutes before shutting itself off again.

Either way, here are some of the issues that can cause this problem. Then, we’ll get right into the solutions because that’s what most people are here for. Still, it can be helpful to know what’s causing a problem to avoid it in the future, so we’re going to start with that.

If Your Panasonic TV Is Turning Itself on and Off…

If your TV turns itself back on after you’ve turned it off, here are some possible causes of the issue, and what you can do. When this happens, it’s usually an issue with the remote control or with the power supply. If it turns off and doesn’t turn itself back on automatically, skip to the next section…

It could be an issue with your remote control or the part of the TV that receives the signal. Try getting a universal remote to use instead, or taking the batteries out of your current remote to see if the problem stops.

If the remote control isn’t the problem, it could be issue with the power supply. If there’s a “brick” attached to the power cable, your TV has an external power supply. Usually, the power supply is inside of the TV so this is something to let a professional take a look at. You don’t want to mess around with this type of thing unless you’re experienced in repairing electronics.

Either way, you can unplug your TV and carefully unscrew the back of it. If you notice any obvious issues, like capacitors that are blown or anything that’s leaking, this will diagnose your issue. Don’t touch it, though!

This could also be an issue with the firmware/software of your TV. If you’re able to, before it restarts itself, try going into the menus and turning off any “auto-updates” from the network settings. In fact, try disconnecting it from your network altogether, if you have a smart TV.

The Solution to Panasonic TV Keeps Turning Off

It’s possible this is being caused by some type of bug or glitch in your television, or an issue with the software. If this is the case, you’re in luck, because these are some of the easier issues to fix.

In fact, we can simply give you a small handful of things to try, and chances are that one of them will work. Unfortunately, sometimes, this won’t fix the issue, but oftentimes it will.

If your Panasonic TV keeps turning off, the first thing you should try is to turn it off for a minute or two. This simple trick can fix a lot of issues with TV’s, but if the problem is that your TV is shutting off on its own, you might need to go on step further.

The next thing to try is to unplug the TV’s power cable from the wall. If turning off the TV didn’t work, this probably will.

If this still isn’t working, there could be an issue with your home’s power. There could be some kind of interruption to the flow of electricity that’s causing the TV to shut off. Do you notice lights flickering or any other electronic devices acting up?

Do you have a Smart TV? Try closing all of the apps and seeing if your TV still shuts off.

Other Things to Try When Your Panasonic TV Shuts Itself Off

You might need to clear the cache on your TV. To do that, navigate to your TV’s menu using your remote and look for a menu called “Settings” or “Apps”, depending on which model of TV you have.

Find the screen that shows all of your apps, and choose the “Clear Cache” option. You’ll need to do this for each app that your TV is running, since you don’t necessarily know which one is causing the problems.

Once you’ve cleared the cache on your TV, turn it off for a minute and then turn it back on.

Now, return to your programming and see if the TV is still giving you issues.

If it’s still turning off, you’ll need to try deleting apps and re-installing them. The process is to start by deleting the app, then rebooting your television, and then reinstalling the applications. It’s a nuisance, for sure, and that’s why we had a bunch of other things to try first that are a lot easier.

Checking If Your TV Is Overheating

The TV turning itself off could actually be a built-in safety mechanism to ensure that it’s not overheating too much. If your TV’s overheating, it may turn itself off to avoid damage or fire. Or, the heat itself could be causing the issues which are making it shut off.

Check the vents around your TV’s frame and make sure that they aren’t obstructed. Also, you will need to make sure that your TV isn’t right next to a heater, or lacks proper ventilation, or anything else that could be causing it to overheat.

You may need to get a small house fan and blow it towards your TV to help dissipate the heat. If you try that, and it works, then you know that your TV is having heating issues. You’ll want to get the TV looked at, or consider replacing it, because overheating electronics are a recipe for disaster.

Other Reasons Your Panasonic TV Keeps Turning Off

Before I want sign-off, I want to leave you with a few other leads, just in case you haven’t found your solution yet.

The issue where your TV turns itself off, or turns itself off and on, could be a problem with your cables so try replacing them. A poor connection could cause the TV’s screen to go dark momentarily, which could look similar to the TV turning itself off.

This applies to audio/video cables like HDMI, but also for your TV’s power cable. It’s worth a shot if all else fails.

As a final thought, just remember that most people throw their devices out at the first sign of any issue.

Taking a bit of time to look for a fix, and to try a handful of different things, can save a lot of space in the landfills and can also save you a lot of money.

Learning to fix and troubleshoot your stuff is such a great skill to have so even if your TV doesn’t end up getting fixed, please don’t get discouraged.

If we only end up being able to help 1 out of every 10 people whose Panasonic TV keeps turning off, that’s still a lot of TV’s that won’t end up in a landfill just yet, and that’s hundreds of dollars that each person saves by continuing to use their TV that was barely broken at all, and was easy to fix.